Offices are notorious for being too hot, and too cold. At the same time! Space heaters, floor fans, and desktop fans cause problems with electrical circuits and create hazards. ZOO Fans improve air circulation and eliminate hot and cold spots.

Time to get rid of those fans and space heaters, once and for all! ZOO Fans effectively mix the air, gently destratifying the space and delivering conditioned air down to the floor where all the people are. HVAC systems run less, comfort goes up and energy costs go down.

Spaces with even temperatures are more comfortable, and cost less to heat and cool. Sounds like it’s time to put ZOO Fans to work!

Comfortable Meetings of the Minds

ZOO Fans In-Ceiling, IC-Series Fans are a great solution for conference rooms, offices, auditoriums—anyplace with drop ceilings. These fans utilize a rugged mixed-flow impeller with the leading in-line motor in the world, industry rated for energy efficiency, and offering an unmatched 4-year warranty.

For open ceilings in atriums, entryways, offices, fitness centers, food courts and other locations, consider the H-Series Fans. With their patented design, these fans are more efficient and produce more air, dollar-for-dollar, than any other fans in their class. And ZOO Fans has the independent, third-party test results to back that up.

All the perimeter offices and the conference room at a Cadillac dealer in Indianapolis were “either stuffy, or too hot, or too cold.” A quick analysis showed there was plenty of tonnage in the building, it just needed to be distributed better. A series of ZOO Fan IC-Series fans were installed, acting as transfer fans.

Instead of using jet balls to return the air to the Occupied Space, traditional dispersion diffusers that matched the existing diffusers in the offices were installed. Each office was provided with its own speed control. Since the system utilized a non-ducted return, another 2 x 2 return grid was installed in each of the offices and in the conference room to provide additional return volume for the greater airflow.

All eight of the problems were solved.

ZOO Fans will help in just about any space, heated, cooled or non-conditioned—Open Ceilings and Drop Ceilings, from 8’ to infinity and beyond! Seriously, very, very high ceilings are no problem.

ZOO Fans are installed in office parks from Connecticut to California, a 3-story high customer lounge at an MLB stadium in Cincinnati, atriums in offices, hotels, and hospitals, Class A office lobbies in Chicago, and conference rooms from New England to Alaska.

ZOO Fans offer fast payback, typically 18 to 36 months. There are lots of ways to save energy, but few that noticeably improve comfort at the same time. Quiet down those thermal complaints, improve productivity, and pay for it all very quickly with energy savings. Give us a call! 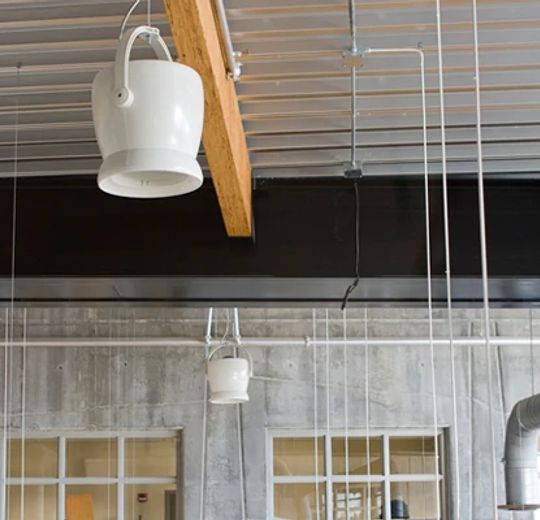