These small, quiet, energy-efficient fans are specially designed to create even temperatures from floor-to-ceiling and wall-to-wall, in open areas, under and over mezzanines, around all kinds of obstacles. Including large aircraft.

Noticeably improve comfort in the zone of occupancy, where most people live and work. Help eliminate condensation, aircraft and floors dry more quickly, temperatures recover faster when doors are closed—safety, comfort, and productivity improve. And it’s paid for quickly with energy savings!

Big bladed fans, called HVLS for High Volume Low Speed, deliver a lot of air. But those blades can interfere with fire-suppression equipment and cause a strobing effect with lighting and skylights. Big Fans are also hard to install around cranes, cables, pneumatic hoses, lifts and…oh yeah, aircraft! Do you really want those big, unshielded propellers spinning around over multi-million dollar machines?

ZOO Fans two largest Open Ceiling fans offer an enclosed fan motor capable of mixing the air in hangars well-over 100’ high. The H120 and H140 Premium Performance fans offer high-precision engineering and performance with EC technology. Without being mounted directly overhead, these fans will circulate air over and under aircraft, and they’re easy to control.

Monitor and control the fans via your BACnet or MODBUS system, or via a web-enabled user interface. We can also provide control algorithms for the BAS so the fans will automatically speed-up and slow-down based on the “Delta-T” (temperature difference) between the ceiling and floor, keeping temperatures balanced automatically.

ZOO Fans H60 Premium Performance fans are the perfect solution for hangars that don’t reach to the sky. Installed in hangars as high as 80’, the H60 AC and EC fans will successfully destratify the space. In hangars with lower ceilings, these fans are truly the way to fly.

And not to be left behind, for even lower ceilings, check out the ZOO Fans H30 Premium Performance fans. Sometimes the right answer is a mix of sizes—H30 in the nose area, H60 around the fuselage, and H120/160 in the tail section.

We’re here to help develop one. Just give us a call and tell us where you want to go! 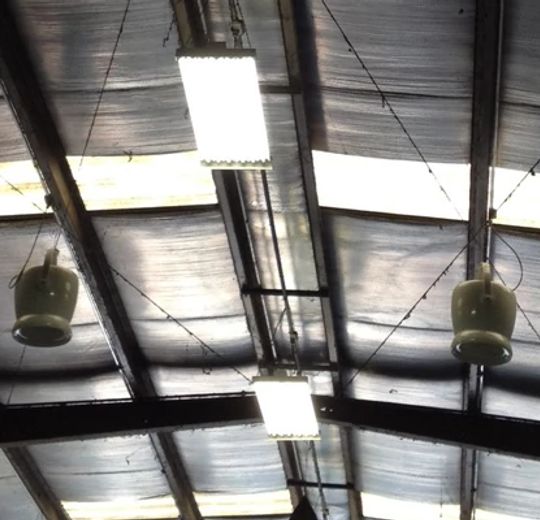